Being a big proponent of Linux on the desktop I was excited to have the opportunity to talk with Aaron Prisk of the West Branch Area School District, who has recently helped migrate 80% of the school district’s infrastructure to Linux. When I first heard about the district’s move to Linux I wanted to find out as much as I could about his experiences during and after the migration. This is a great story about how Linux can be used by people of all ages and technical skill while still providing a low cost and secure platform for everyday operations. I’m glad to share this story and I hope it helps advance Linux as a viable option for anyone considering an alternative to proprietary Operating Systems.

When did the idea to migrate to Linux first come under consideration and what were the driving factors behind the transition?

Aaron Prisk: “We were approached by our superintendent in early 2013 to create a long-term technology plan. At the time, we were a Windows and proprietary software dominated school with a small handful of Linux machines floating around. Districts around us were either going the Chromebook route or forgoing laptops and investing in Windows virtual labs. After meeting with our technology committee we opted to go the 1:1 (1 device per student) route. We needed an approach that was flexible, affordable, and could be managed by our two-man IT department. My colleague and I, being long time Linux users, saw a good middle ground between those two approaches with Ubuntu. We could replicate the simplicity and security of a Chromebook, but without the vendor lock-in and lack of applications.

At the same time, we had to come up with a plan to address our aging grant purchased laptops that make up the other 65% of our inventory. With Windows, long log in times and poor performance greatly hindered their use. Moving those machines to Linux greatly improved their performance, cut out log in times and allowed them to become valuable classroom tools again.”

The Linux ecosystem is huge. With so many distributions and support options, what made you choose Ubuntu as the default platform?

Aaron: “We tossed around a few popular distro’s during the testing phase (Ubuntu, Fedora, and OpenSUSE), but ended up going with Ubuntu. We found that Ubuntu tended to handle the laptop hardware the best. Ubuntu would also receive updates for multiple years under the LTS plan, it has a huge array of packages, lots of great PPAs and is also supported by the state testing diagnostics software we use in the district.”

I understand that you did a pilot program at first. How did you select the areas to use in the pilot and what lessons did you learn from the initial testing? 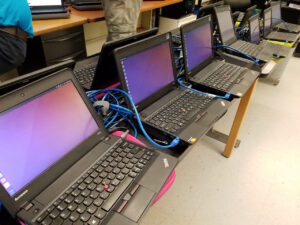 The first large-scale pilot was the 9th grade 1:1 rollout. Our tech committee selected 9th grade as it provided the largest sample size of students. We opted to give the kids full root access to their devices and encouraged them to experiment with software. Our approach was to create an open campus where students were given a toolbox and not a single tool.

We learned early on the value of training our faculty on how best to utilize the new technology in the classroom. We saw a need to educate our faculty on the new platform, and the many education resources they could now take advantage of. We also learned the great value of our student help desk program. Throughout the process, they did an excellent job helping us image, hand out, and repair the devices.”

What were some of the biggest challenges to this type of project? Did you have any software compatibility issues to overcome?

Aaron: “One of our biggest challenges was educating our users on how to best utilize the new operating system, and our new computing approach. Getting over that “fear of the unknown”, and encouraging the users to experiment with Linux and its many applications.

We tried to push our staff in the years leading up to the migration to use cross-platform and web based applications, specifically in productivity and education based software to help mitigate the software compatibility issues. We had some push back when it came to moving away from Microsoft Office. While LibreOffice and Google Docs are great programs, students and faculty were more familiar with the Office product line. Over time, that resistance has lessened, I think due to students and teachers growing more familiar with LibreOffice and online suites.”

Since the migration have you come across any unforeseen issues, things you didn’t anticipate?

Aaron: “Thankfully we haven’t run into any major issues, only a few minor problems. Early on we ran into a few small issues with automatic package updates. We assumed enabling automatic security update installation would help keep our laptops updated, but often resulted in broken packages.”

You say that Windows still makes up about 18% of your infrastructure. Where are you still using it and do you have any plans to transition those areas off of Windows in the future?

Aaron: “The vast majority of our staff’s machines run Windows, mostly for familiarity and some for support of proprietary software they still rely on for day to day tasks. We also have three student labs that run Windows: 2 for Computing classes and 1 for a Drafting/CAD class.

We would certainly like to migrate more machines to Linux, but it hinges on support from proprietary software that doesn’t have open source equivalents quite yet.”

Tell me a little bit about your in-house spin on Xubuntu “CorvOS 1.0”.

Aaron: “In our first year of migration, we ran Edubuntu on the 600+ cart laptops. It served us well, but we ran into limitations and bugs with the Gnome Fallback Session and the Edubuntu project seemingly died after the 14.04 release. After researching other education-oriented distro’s and spins, I figured I could take the feedback I got from students and faculty and tweak Xubuntu into a well-functioning replacement. 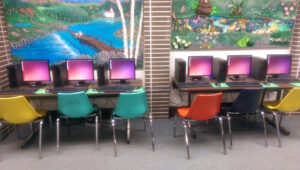 The name corvOS is a play on “corvus” the scientific name for the crow and raven family of birds. My goal was to create an extremely easy to use, kiosk like distro that would be easy to use for students, and easy to manage for administrators. I made a handful of XFCE tweaks, installed a bunch of great educational tools and used some clever Bash scripts that keep the desktop experience consistent. It was during this time that I saw a need for a simple way to manage the devices and came up with the idea of Lagertha.

I found that spinning my own distro was not only a ton of fun but gave me the opportunity to build something that I know would best fit the district’s needs. I’d love to distribute corvOS, but I’m still unsure of the best way to do so. My goal would be to make it easy for a non-Linux savvy individual to install and use it in their district. At the very least, I may make a script that simply converts Xubuntu into a working corvOS box.”

**Going open source has allowed us to save money, expand access, and provide a more secure computing environment.**

What is Lagertha and how is it being used in the school district? How might someone get involved in contributing to the project?

Aaron: “Lagertha is a web based tool I made for simple management of our corvOS machines. We use it to manage the packages installed on our corvOS devices and make changes to them as we need. With Lagertha you can:

Like corvOS, I wanted it to be exceptionally easy to use so a Linux newcomer could use it in their business/district.

I’m not a programmer by trade, so I would love if others wanted to get involved. I have plenty of features that I’d love to add, but don’t always have the time or skill to do.” (The project is located here: https://github.com/aaronprisk/lagertha)

Do you have any advice for other school districts or businesses that are considering a transition to Linux?

Aaron: “First, I would tell them that Linux isn’t as scary as it used to be. Linux still has a stigma that it’s difficult to use and is only suited for power users, but that’s not the case anymore. I work with a user base ranging from 5 years old to 65 years old and I see them both being able to use Linux machines with ease. Going open source has allowed us to save money, expand access, and provide a more secure computing environment.

For the technology admins in particular, since moving the majority of machines to Linux, our technical issues have gone WAY down and we’ve been able to breathe life back into our legacy devices.”

I want to say thank you to Aaron Prisk for taking the time to share this story with me and for being so willing to answer my questions. I’m glad to see that the West Branch School District has had such a successful implementation of Ubuntu, due in no small part to the patience, persistence, and skill of Aaron and his colleagues. For anyone capable and interested in helping out with Lagertha please check out Aaron’s github for the project: https://github.com/aaronprisk/lagertha.

Find services that require a restart

Ubuntu offers a live patching utility that allows kernel patches to be installed without requiring a system restart to be applied. Read more about online patching in this post about patching. That said, in many cases other services or processes on your system may need to be restarted after an upgrade. Finding services that need to be restarted in Ubuntu Install debian-goodies sudo apt update sudo apt install debian-goodies Now just run Read more

Change the Default Text Editor in Ubuntu So I’m a huge advocate of Ubuntu. It has long term support releases, more packages than you would ever need, free online unattended patching, and you always have an in-place upgrade path to the next LTS version. What more could you ask for? I’d like to ask that nano lose its privileged status as the default text editor! When making changes to sudoers, passwd, or group files you should really be using the built-in tools visudo, vipw, and vigr. Read more

NOTE: While this may still work the information is out of date. Please see the instructions found here eff.org for more up-to-date instructions. Free SSL Certificate with Let’s Encrypt If you have ever installed an SSL certificate you know that it can be a tedious process. Let’s Encrypt makes this easy. Just call the letsencrypt command from the terminal and point it at your domain. Securing your website with a valid ssl certificate from a recognized and trusted vendor shows your website visitors that information transmitted between your site and their browser is encrypted. Read more