There are many instances when it’s useful to have multiple files open in vim , but if you aren’t familiar with this tool you can find yourself needlessly jumping around between multiple windows.

If you are not already using vim start by opening a command prompt and type vimtutor , once you’ve become familiar with how to navigate, search, and edit a document with vim this post will make more sense to you.

Use vim to see what is different between two files

There are several ways to find differences between two files on a Linux server or desktop. I like to use vim when I’m scanning a configuration file for recent changes from an earlier iteration ( assuming of course that there is a backup of the last known, good, configuration).

Comparing two files is a common task and there are several ways to view the differences between multiple files, but occasionally you may want to do this visually side by side.

With the -d option vim can open two, three, or four files and vim will open the files and highlight the line that is different. Try it.

You should see something similar to this: 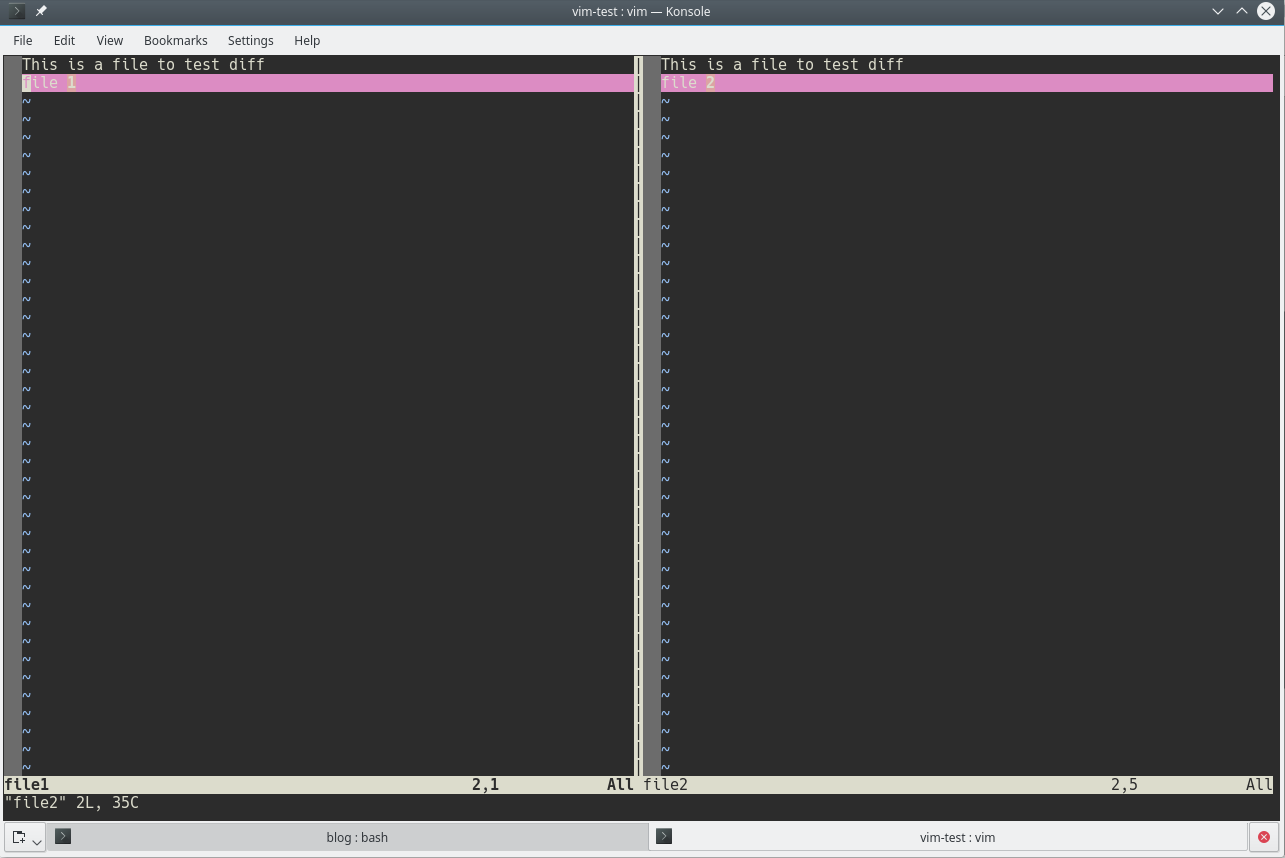 Notice how the file opens with the cursor set to the line that is different, this is so that you can quickly get to work at the exact place where the files differ. Also helpful, is the fact that vim will automatically highlight the entire line to quickly draw your attention to the differences.

Using -d highlights a use for the split command. If you are working on a file and want to look at another file at the same time. Maybe to use some lines as a template, or just to compare an old configuration to a new one you can use the :split or :vsplit command.

And then issue the :split command to open file2 .

The default split command will split the screen horizontally: 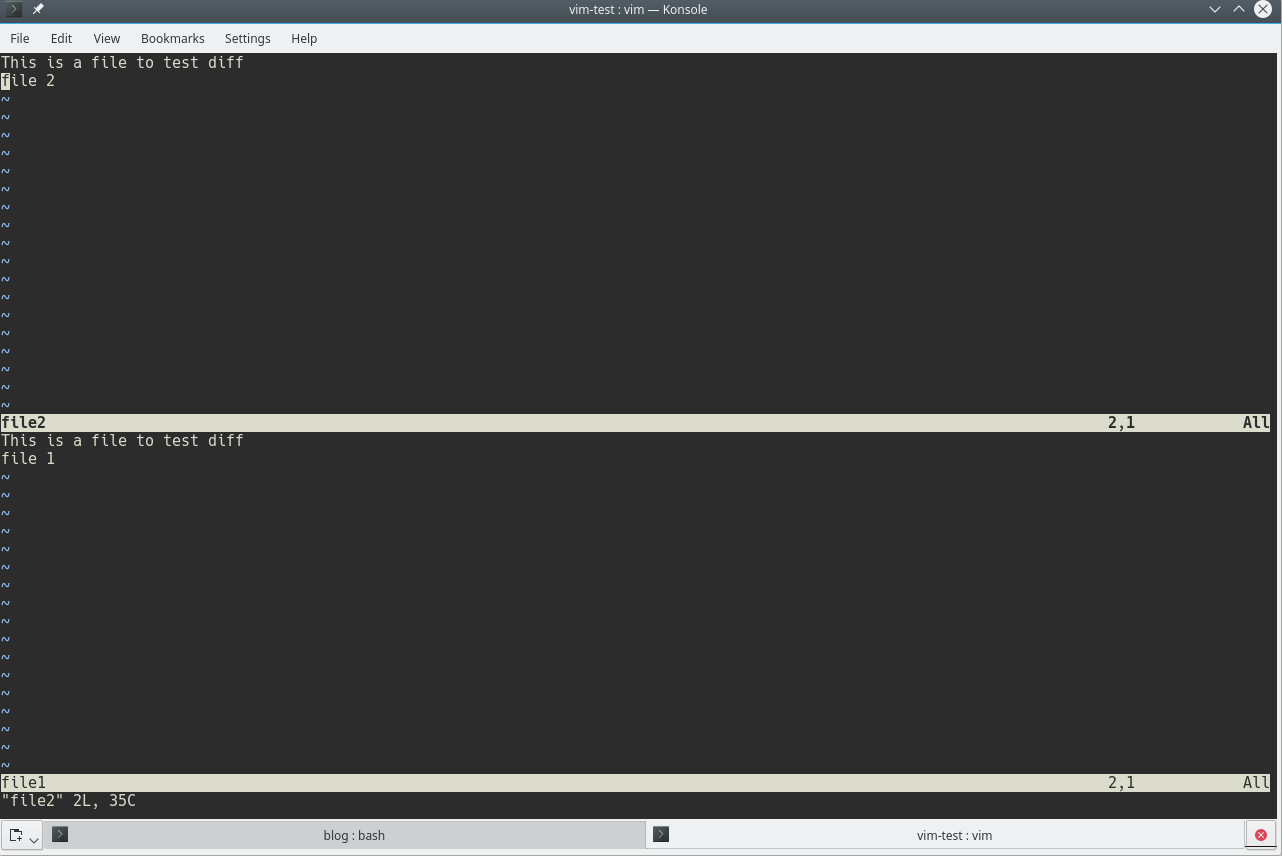 Close file2 and this time look at the vertical split by issuing the :vsplit or :vsp command

This time, as the name suggests, the window will split horizontally allowing you to view files side by side. Personally I find this format to be the more useful of the two. 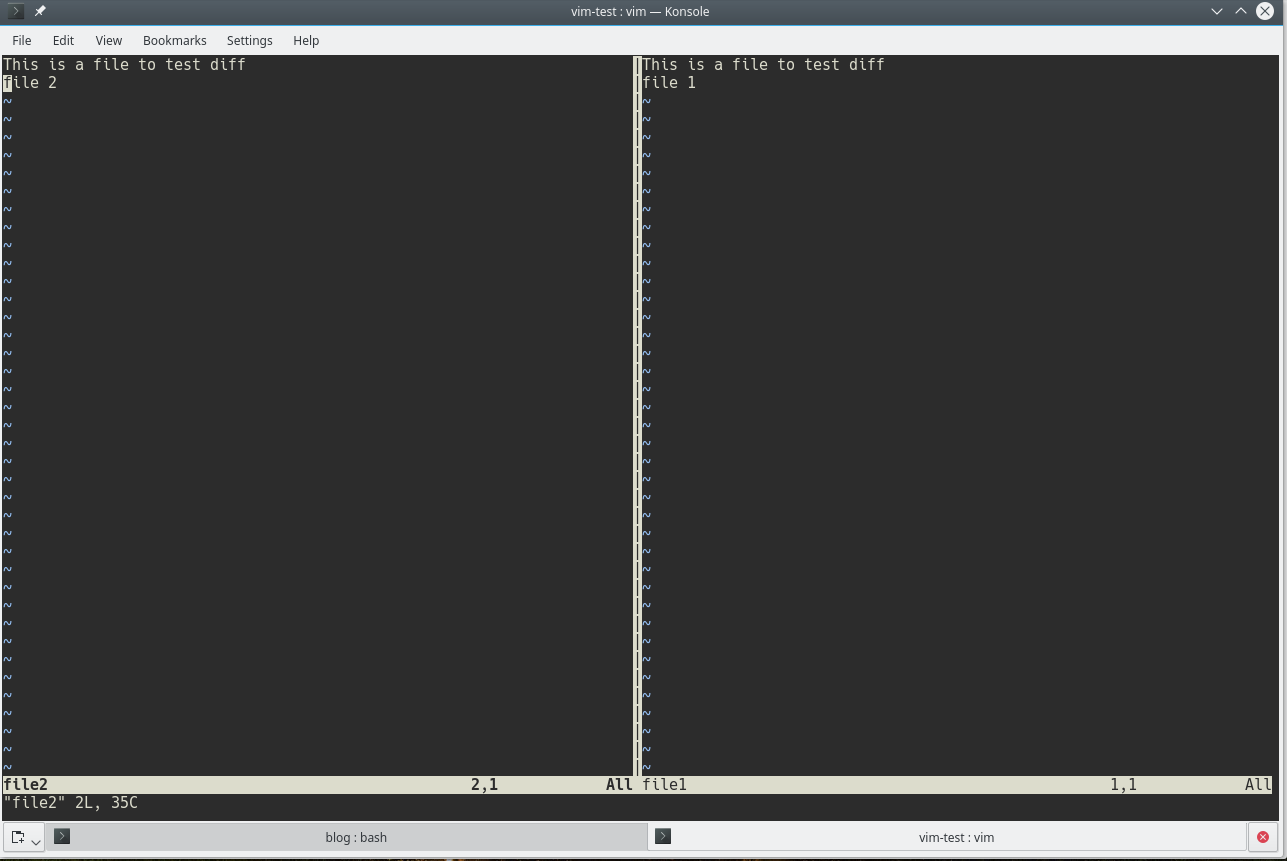 You can navigate between each split by using the key combination ctrl-w and then the direction key in which you want to move. So, to move from file2 to file1 you would hit ctrl w and then the right arrow (or the L key if you don’t like moving your hand quite so far).

There are other fancy things you can do with files in vim . If you are feeling a little wild look up tabs and buffers, both of which might make your life a little easier if you aren’t already using them.

Finding help with Linux If you hang out in enough Linux forums asking questions sooner or later someone will tell you to read the manual (presumably they think this will help you). Fortunately, over the last few years “rtfm” has ceased being the default answer to most questions from new users. All things considered, the Linux world has become more user friendly even if the man pages haven’t. Learning to read and understand man pages will allow you to separate yourself from new, and even some intermediate, users. Read more

Change the Default Text Editor in Ubuntu So I’m a huge advocate of Ubuntu. It has long term support releases, more packages than you would ever need, free online unattended patching, and you always have an in-place upgrade path to the next LTS version. What more could you ask for? I’d like to ask that nano lose its privileged status as the default text editor! When making changes to sudoers, passwd, or group files you should really be using the built-in tools visudo, vipw, and vigr. Read more

Linux is not a bulletproof operating system, no doubt flaws, vulnerabilities, and exploits exist at this very moment that are unidentified and unpatched. It’s also very likely that many Linux systems are running old unpatched kernels that are just waiting to be owned by some nefarious persons driven by who knows what motivations. Linux like Windows has a human flaw built into it, businesses don’t want downtime for updates, users want too many permissions, and sysadmins don’t want to risk breaking an application by running an OS update. Read more